The first ever.. Palace Country Festival!

Derek Buckley is a Southern Wisconsin up and coming solo acoustic artist.  His shows combine familiar favorites from country legends like Waylon and Willie to today’s chart toppers including Kenny Chesney, Luke Bryan and Chris Stapleton.   While performing throughout the midwest in 2019, he was honored to kick off the Capital Brewery Country Bash presented by Madison’s Q106 and was invited to perform at Brat Fest on the Baker Tilly Main Stage with Country Wide.  Derek has his eyes on publishing his first original songs in 2020 and will be in the studio working on his upcoming releases.  Don’t miss Derek Buckley and his mix of classic and new favorites that will have everyone singing along.

Bree Morgan Reloaded was founded by singer-songwriter/performing artist Bree Morgan, along with live music lover Derrick Roenneburg. BMR is ready to bring you a show that will keep you dancing and singing all night long! With band members of diverse backgrounds of music style and learning, working together has already brought us closer as a band, and is continuing to create us into better musicians. Bree Morgan Reloaded is ready to bring the live music scene to a new level in Southern Wisconsin!

Gone Country is Chicago’s Premiere Country Cover BandAt the core, Gone Country is a group of rock and roll musicians who have a deep appreciation for country music. Since 2013, Gone Country has been performing regionally to the acclaim of critics and audience members alike. The band plays old standards and the latest hits in country including Keith Urban, Luke Bryan, Jason Aldean, Garth Brooks, Miranda Lambert, Carrie Underwood, The Band Perry, and many others. Gone Country brings a fun, high energy performance to each show, leaving no excuses for anyone to be left in their seat. Come see your favorite songs performed the way you like ’em!

Former American Idol contestant and country artist, Jada Vance, is always spreading her good-time, spunky attitude and contagious smile. Touring nationally, performing originals and covers, Jada and her band are setting the stages on fire! 149 Videos. Jada is knows for her huge smile and spunky attitude. Jadas’ performances are very high energy that will make you want to get up and dance but she can tell a story that will pull at your heart strings with the realness and delivery of her emotional lyrics.

MADISON COUNTY is a 7-piece Country show band, based out of Madison, WI, that has evolved its high-energy engaging show, over the years, to stay fresh and unique. They have been voted Local Group of the Year 9 years in a row at the Q106 MCMA (Madison Country Music Awards), Favorite Local Group at the 96.3 Star Country Awards, Country Artist of the Year at the MAMA Awards (Madison Area Music Association), People’s Choice Award Winner for 6 years at the WAMI Awards (Wisconsin Area Music Industry), Isthmus Readers Favorite Local Country Band, and Madison Magazine’s Madison BEST Local Band and Country Band, 5 years running.  MADISON COUNTY has also been acknowledged with a Meritorious Achievement Award at the MAMA Awards, for raising their incredible fan base to such astronomical numbers. 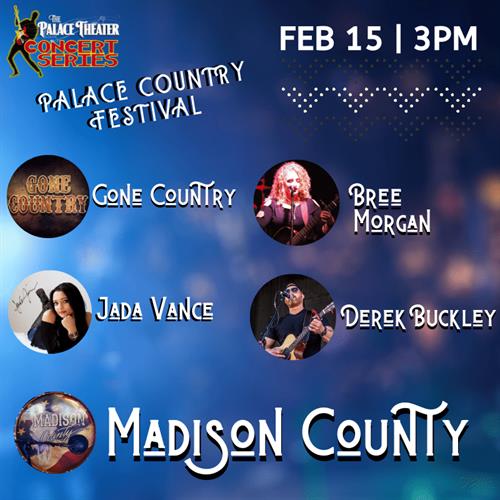 Google Yahoo iCal (Outlook, Apple, or other)
Copyright Baraboo Chamber of Commerce 2022 - All Rights Reserved
Back To Top
×