Described as "a world class musician" (Galena Gazette) who plays with “high energy and polish” (WQXR), cellist Anita Graef has earned recognition for her music making as a soloist, chamber musician, and orchestral performer. Notable appearances include Carnegie Hall’s Weill Recital Hall, the Dame Myra Hess Memorial Concert series, and “Concerts from the Library of Congress.” She has also performed in recital as a guest of various radio programs, including “Young Artists Showcase” on WQXR, WFMT, WGTE, WUOL, WOSU, WVPB, NPR and others. She directs and performs with the Juliani Ensemble, an innovative, multi-faceted chamber ensemble, with whom she has performed extensively both nationally and internationally. Highlights of 2021/2022 include performances at Columbia University, “Temecula Presents,” the 1901 Arts Club in London, and the Speed Art Museum.

Born into a family of professional musicians, Anita grew up surrounded by music. She began piano studies at age two, while beginning to study cello at age four, later making her concerto debut at the age of twelve. She went on to obtain a Bachelor’s Degree from the University of Michigan’s School of Music, Theatre, and Dance, where she studied with professor Anthony Elliott. Following this, she completed studies for a Master’s Degree at the University of Cincinnati College-Conservatory of Music, under the tutelage of Ilya Finkelshteyn. When not making music, Anita enjoys reading, cooking, crocheting, weight lifting, hiking, spending time with friends and family, and exploring new cities. Anita performs on a modern Italian cello by Ferdinando Garimberti, dated 1923. 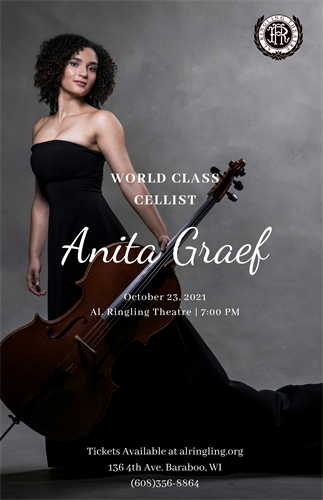 $31.00 per ticket as general admission

Google Yahoo iCal (Outlook, Apple, or other)
Copyright Baraboo Chamber of Commerce 2021 - All Rights Reserved
Back To Top
×